Taras STEPANENKO: “Now all Ukrainians are one team” 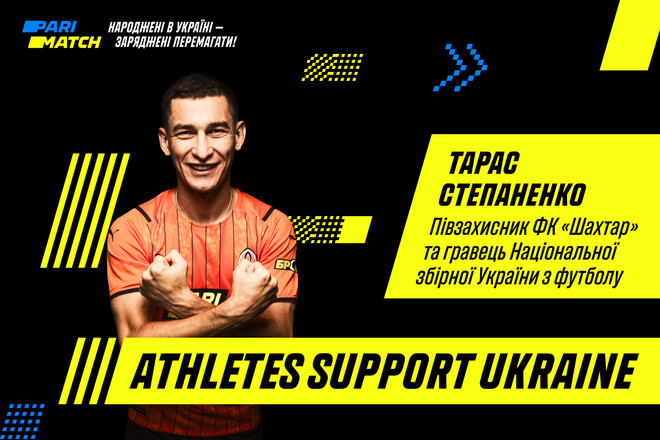 In an exclusive interview with the Parimatch Ukraine team as part of the “Athletes support Ukraine” project, Stepanenko shared how the war caught him and how he is now helping Ukrainians, what are the chances of the Ukrainian national team at the World Championship, and what will Ukrainian football be like after the victory. The full interview is available for viewing on the official Parimatch Ukraine Youtube channel.

The “Athletes support Ukraine” project from Parimatch Ukraine tells how athletes help Ukraine and encourages fans not to lose heart, to be brave and charged to win! In turn, the Parimatch Ukraine company carries out a number of charity projects, one of which is a charity auction, the lots of which are collectible sports trophies. All proceeds are directed to help Ukrainians.

Russia’s full-scale invasion of Ukraine began when Taras Stepanenko was at home with his family. They woke up from the explosions, realized that the war had begun and immediately went down to the basement. Now some of the footballer’s relatives are still in relatively unsafe places:

“My parents are in Zaporozhye. It’s not entirely safe there now – there are battles 40 km from the city, and rockets arrive in Zaporozhye itself. Even on the island-reserve Khortytsya, and there is nothing there but a museum and a couple of restaurants, they beat you, just to beat you. I ask my parents to move to a safer place, but they do not want to leave the house.”

– Do you help Ukrainians and Ukraine now?

Certainly! The guys from the national team and I donated money, we help with point requests from the Armed Forces of Ukraine – we buy and deliver what they need.

– What is the mood of the team now?

We believe in the victory of Ukraine and have no right to dismiss nurses. We must be the same as our military – brave, strong and do everything possible to win.

– Is it possible to show a good result on the field when there is a war in the country?

If we talk about Shakhtar, then we play in order to at least slightly raise morale and energize the fans. I admit, it’s hard now to set the team up for a good result, because all thoughts are now far from football. But we play for our country!

– Did you manage to talk to Lucescu during training with Dynamo? What is his position on the war in the country?

We have always been in touch with Lucescu from the moment we arrived in Bucharest. During this time, he had been ill with both the coronavirus and the flu. We constantly talked about the war with him, and I can confidently say that Lucesko is completely on the side of Ukraine and supports the Ukrainians.

– What do you think, will we be able to see the team play at the World Championship?

Of course we have good chances! We participate in European-level matches, these are worthy games. We will play more matches with the rest of the players of the national team, which will allow us to prepare for the World Championship.

– Will the war affect the Championship of Ukraine?

When Russia occupied Crimea and Donbas territories in 2014, the level of the Ukrainian Championship dropped significantly. But in recent years, everything has begun to recover, as new investors have appeared who are ready to develop Ukrainian football.

A full-scale war has made its own significant adjustments. The main thing at the moment is to win and achieve peace in Ukraine. We have the infrastructure to revive football, because the country needs sports, but it’s too early to talk about it.

Ukraine has been and will be a rich beautiful country! My wife and I decided that we wanted to live only in Ukraine. This is our country, our home and our people. After the victory, Ukraine will definitely become more economically successful, because I am sure that foreign investors will come to us. Now the main thing is to stop the war so that people stop dying.

Now all Ukrainians are one team. We support each other, our government, the Armed Forces of Ukraine and all of Ukraine as a whole. When we are united, no enemy can defeat us. We will stand to the end, we will drive the enemy out of our country, we will win and become even stronger!

Now the Ukrainian team continues to prepare for the 2022 World Cup qualifier against Scotland, which will take place on June 1. Ukrainian legionnaires are finishing the season with their European clubs for now and will soon join training with the national team later.

Nikolay SHAPARENKO: “I am glad to be back in the national team. Getting ready for the main match

Nikolay SHAPARENKO: “I am glad to be back in the national team. Getting ready for the main match

Ex-player Zorya can go to the Premier League club