72nd day of the war. May 6. President of the Russian Federation Vladimir Putin continues to wage a war of aggression in Ukraine. In connection with military aggression Sport.ua switched to a special mode of operation. The site covers all the events that take place in Ukraine.

Online broadcast of events, May 6

According to Russian insiders, Putin gave his press secretary Peskov recommendations to choose words more scrupulously and deliberately when answering questions about the special operation and possible mobilization, that is, not to carry a blizzard.

The issues of officially declaring war and mobilization are currently under active discussion and sands, according to Putin, he took a lot upon himself, calling information about mobilization plans nonsense and arguing that there are no such plans.

Now Putin is discussing plans for a possible mobilization. Seems to be, with the very fact of the need for mobilization, he decided. Discussions are already underway as to what form and in what time frame it should be held. During a meeting of the president with the leadership of the military bloc, they discussed the mobilization in three stages before the end of the year, with a general call up to 450 thousand people [Генерал СВР].

06:45. Summary of the General Staff: Russians continue to storm Azovstal

In Mariupol, the Russians continue to blockade units of the Defense Forces in the Azovstal area, and in some areas they resumed the assault with air support to take control of the plant. 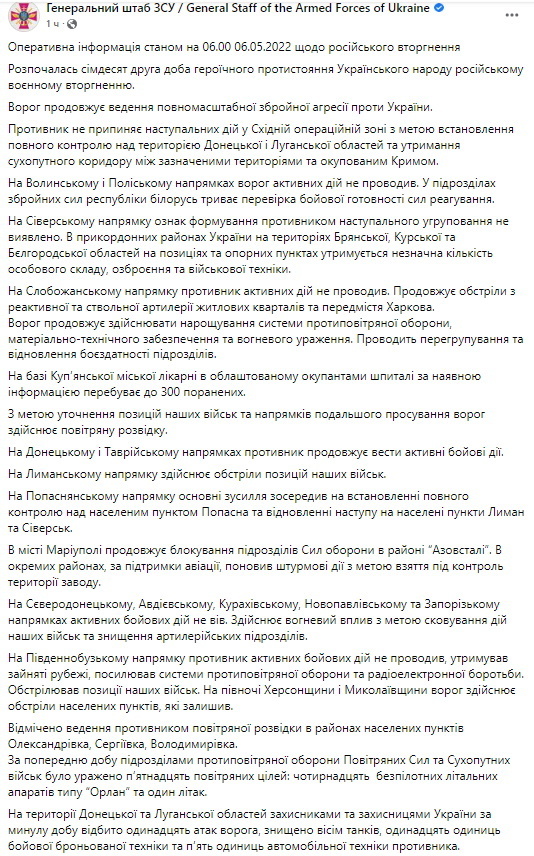 The Pentagon estimates that most Russian forces have withdrawn from Mariupol and moved north of the city.

Pentagon spokesman John Kirby at a briefing (Ukrinform): “Our knowledge of the disposition of Russian forces, you know, is not perfect. In general, we would estimate that most of the Russian forces, the ground forces that were sent to Mariupol, withdrew and moved north of Mariupol. A small number, roughly equivalent to a couple of battalion groups, are still in Mariupol and its environs.”

It is noted that the Russians mainly carry out airstrikes on Mariupol and its environs, and in particular on Azovstal, where Ukrainian defenders and civilians are located.

The US provided Ukraine with intelligence that helped hit the Russian cruiser Moskva, the flagship of the Russian Black Sea Fleet, senior US officials said in the NYT

NYT writes that immediately after the strike, representatives of the Joe Biden administration were scrupulously silent, refusing to even confirm the fact of a strike on Moscow. But in recent days, US officials have confirmed that data from US intelligence sources was provided to Ukraine hours before the Neptune rockets were launched.

Officials declined to elaborate on what information was passed on. A US official said Ukrainians were asking Americans about a ship sailing in the Black Sea south of Odessa. The states identified him as Moscow and confirmed his whereabouts. Therefore, Ukrainian forces targeted the ship and struck without the knowledge of the United States.

At the same time, according to one official, the information goes beyond a simple message about the location of the ship in the Black Sea. As other officials have said, there is no certainty that Ukraine could have hit the ship without US help.

03:40. Kharkiv region: a man died as a result of rocket attack

As a result of the Russian rocket attack in Lozovo community A person died in the Kharkiv region.

Lozovsky mayor Sergei Zelensky: “Today was a tragic day – our territorial community was fired with rockets. There is one victim, a man died.

On May 5, the air defense of Ukraine neutralized 15 enemy air targets: 14 UAVs and a plane.

On May 5, the air defense of the Air Force and the Ground Forces hit at least 15 air targets: 14 Orlan-type drones and one aircraft, previously a Su-30SM fighter.

The aircraft of the invaders was shot down in the Eastern direction by an anti-aircraft missile unit of the Air Force.

02:30. UN chief: the third stage of the evacuation of civilians from Azovstal has begun

UN Secretary General Antonio Guterres at a meeting of the UN Security Council, he stated that the third stage of the evacuation of civilians had begun on the territory of the Azovstal plant:

“Now the third stage of the operation to rescue civilians from Mariupol is underway. But our policy is that we will not disclose other details until the operation is completed, so as not to disrupt its implementation.

So far, about 500 civilians (during the two previous phases) have been rescued and transported to safety after living under relentless artillery fire and suffering from lack of food, drinking water and medical supplies.”

Guterres said that representatives of the UN and the International Committee of the Red Cross are conducting a complex operation and are coordinating their actions with representatives of the Russian occupiers and the government of Ukraine. The Secretary General expressed the hope that in the future it will be possible to achieve a ceasefire to save civilians who find themselves in the epicenter of hostilities elsewhere.

VIDEO. Not afraid of war. Croatian defender returned to Kryvbas

Dyukov called the conditions for Russia’s withdrawal from FIFA

Sterling could change Man City to another English giant