May 5 to national team of Ukraine joined the players of Dynamo Kyiv, who the day before played a friendly match of their club with the Swiss Basel.

10 Dynamo and Dnipro Artem Dovbik, who participated in the charity matches of Kiev, arrived just in time for dinner at the Elegans Hotel, where they warmly met with teammates who have been working in Slovenia for 4 days already. The guys were glad to see each other, especially in such a difficult wartime.

Having received the equipment of the national team (after all, almost everyone left the capital in a hurry, which means they did not take the uniform of the national team with them), the newly arrived players first entered the field of the training center in Brdo. After a warm-up and a run, the team was divided into two groups: three Dynamo players who played for 45 minutes – Denis Garmash, Alexander Sirota and Denis Popov – joined 9 players who have been working for the 5th day (Aleksey Gutsulyak did not take part in this lesson due to pain in the knee). The rest of the Dynamo players, having completed recovery exercises, got the opportunity to simply watch what was happening on the field.

And there was an interesting competition of 2 teams of 6 players. fitness trainer Vyacheslav Ruzhentsev suggested that the guys alternately perform six exercises for technique and accuracy, in particular, hitting a narrow gap between the chips, stopping the ball clearly in a small square, hitting the ball into the basket and the crossbar. Only after completing each task accurately, it was possible to move on to the next one.

The winning team was the one whose last player, rather than opponents, successfully completed two rounds of tasks. Dynamo Alexander Sirota was the member of the orange team who was ahead of his colleagues from the green six, bringing joyful emotions to all participants in the fan contest. After that, 12 players got the opportunity to play tennisball.

Good news – Mikhail Mudrik started running. Examination did not reveal serious damage to the adductor muscle, only edema occurs. Therefore, Mikhail will need a few more days under the supervision of the national team doctors for a full recovery and return to game training.

On May 6, the blue-and-yellows will hold the first full-fledged training session with virtually the entire squad of players playing in Ukrainian clubs. The evening practice, which starts at 17:00 CET, will be open to the media. Half an hour earlier, journalists will be able to talk with the head coach Alexander Petrakov and a team player in a press conference format. Representatives of the mass media from Ukraine will be able to ask questions via a zoom conference. 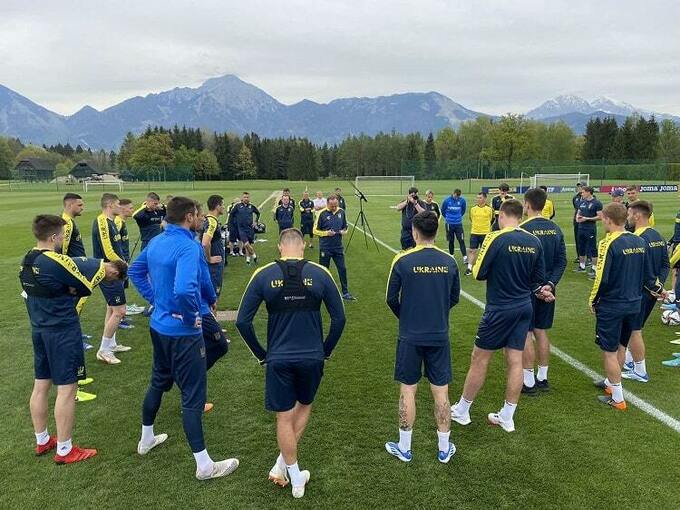 Bayern have raised the price of Lewandowski for Barcelona

VIDEO. At the gates of Koval. Ronaldo scores debut goal in Europa League