Biden signed a lend-lease. Day 76. What weapon will arrive in Ukraine?

76th day of the war. May 10. President of the Russian Federation Vladimir Putin continues to wage a war of aggression in Ukraine. In connection with military aggression Sport.ua switched to a special mode of operation. The site covers all the events that take place in Ukraine.

Online broadcast of events, May 10

08:10. What weapons do Ukraine need now? What can the US deliver?

Ukraine must win in the open. Russian troops will have to be knocked out by artillery and rocket fire from long distances. Therefore, the Armed Forces of Ukraine require much more long-range artillery, multiple launch rocket systems (MLRS) and mortars. If you deploy a lot of fire weapons, you can keep the Russian army under constant fire, prevent it from going on the offensive and force it to withdraw from fortified positions.

By lend-lease program Ukraine, presumably, will be given howitzers with a working range of up to 30 km. They require at least 400 units. American multiple launch rocket systems M142 HIMARS and M270 MLRS, which can be both multiple launch rocket systems and launching operational-tactical missile systems. These installations can launch a ballistic missile with a combat radius of up to 300 km.

Long-range artillery is likely to partially replace the supply of jet fighters. This technique will not require such complex maintenance and will be cheaper than aviation. When the Armed Forces move on to a large-scale offensive, more armored vehicles and air defense systems will be needed to protect the infantry and send weapons to the front line.

To protect civilians and demonstrate the stark contrast between its tactics and those of the Russians, Ukraine must fire accurately, using UAVs as aerial spotters. Therefore, new deliveries of military drones and closed communication systems are expected (Forbes).

There is a possibility of sabotage by Russians at the facilities of the chemical industry in Ukraine in order to blame the Armed Forces of Ukraine for this.

General Staff of the Armed Forces of Ukraine: The enemy is concentrating the main efforts of the aviation group on supporting units in the eastern operational zone: in the Slobozhansky and Donetsk directions and in the area of ​​the Azovstal plant.

There is the use of artillery along almost the entire line of collision. There is still a high probability of missile strikes across the entire territory of Ukraine. 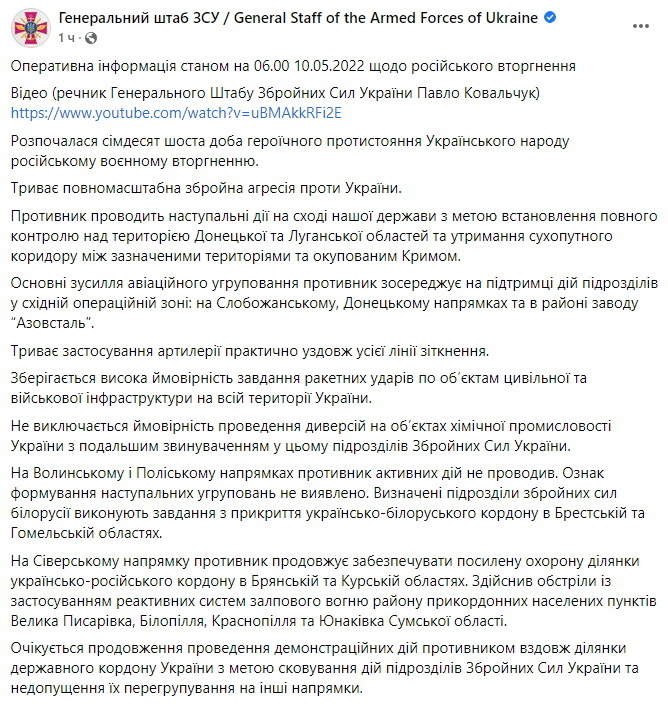 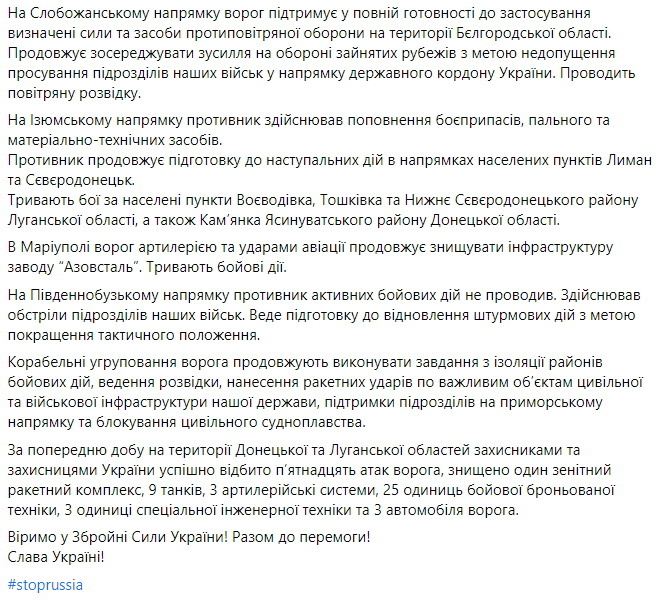 Russian President Putin has become a hostage of the war, he has no way out of the war with Ukraine (Reuters, UP).

President of the U.S.A Joe Biden called Putin very prudent and noted that he was worried that now he (Putin) has no way out (from this situation). Biden said he was trying to figure out what to do about it.

It is noted that Putin mistakenly assumed that the invasion of Ukraine would lead to a split between NATO and the EU, but the United States and many European states came to the aid of Ukraine.

Earlier, Biden said that NATO unity shocked Putin and that he was unable to realize his ambitions of occupying Ukrainian territory.

05:00. The Russians shelled the Sumy region

The Russians shelled the territories of the Novoslobodskaya and Vorozhbyanskaya communities in the Sumy region.

Head of OVA Sumy region Dmitry Zhivitsky: “The evening of May 9 ended with alarm and shelling. At about 10 p.m., the Russians fired on the territories of the Novoslobodskaya and Vorozhbyanskaya communities.”

There are no losses, information on the destruction is being specified, the head of the regional OVA said.

The White House believes that the content of Putin’s speech at the May 9 parade in Moscow is a lie and absurdity.

White House Press Secretary Jen Psaki: “The suggestion that the war waged by Putin was caused by the plans of the West is a clear lie and absurdity.

Putin’s other statements at the parade are yet another version of the revision of history that has taken the form of disinformation and has already taken place in Russian training manuals.

Psaki called Putin and the Kremlin a disinformation factory. Recall that Putin at the Victory Day parade in Moscow called the war the only right decision.

03:30. Source: a well-known Ukrainian ex-people’s deputy was killed during the shelling

In the Zaporozhye region, a former people’s deputy was killed at the checkpoint of the occupiers near the village of Novopokrovka during the shelling David Zhvania.

Advisor to the head of the Ministry of Internal Affairs Anton Gerashchenko reported details:

“According to our source, the ex-people’s deputy died on May 9 from artillery fire near the checkpoint of the invaders near the village of Novopokrovka, Zaporozhye region.

It is also known that Zhvania had Russian citizenship and was an unofficial representative of Rosatom. There are more questions than answers in this story, especially what he was doing in the “grey zone”.

02:30. Several explosions in Odessa. 7 missiles. The mall is on fire, there is a dead person

On the evening of May 9th Odessa an air raid alert was issued and cruise missiles were recorded.

Residents heard several loud explosions, a fire started in one of the shopping centers. Firefighters and an ambulance are on the scene of the fire.

Operational Command South: “One person died as a result of the shelling of Odessa by the Russians, 5 were wounded. Fires are put out. The wounded were taken to the hospital.

7 missiles were fired at the city. Rare, Soviet-style missiles are clearly used, which, due to their age, are already being guided. 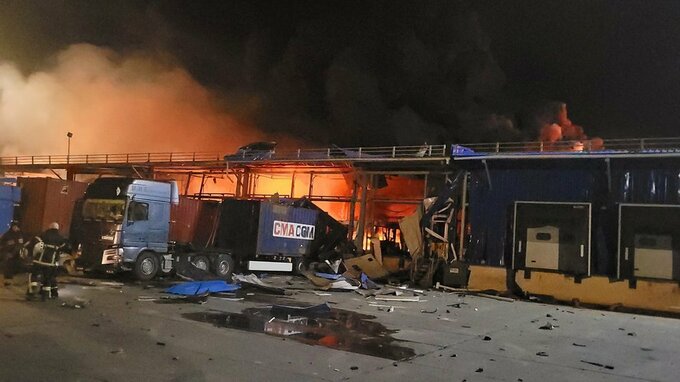 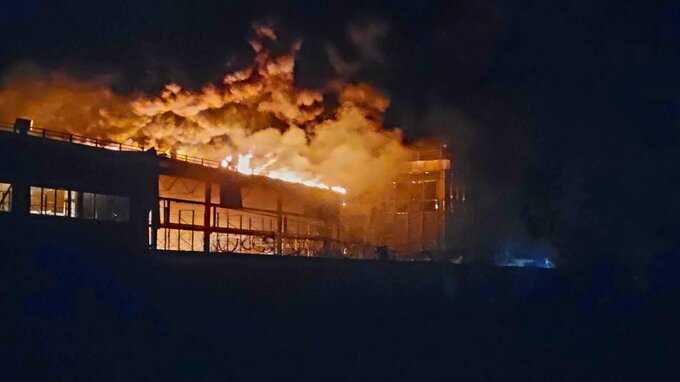 01:30. Surprise for the orcs on May 9th. Biden signed the Lend-Lease law for Ukraine

President of the U.S.A Joe Biden signed a law on the supply of weapons to Ukraine under Lend-Lease, the press service of the White House reported.

The Lend-Lease Law for Ukraine will make it easier to receive military aid from Western countries.

Last week House of Representatives The US Parliament approved the lend-lease bill, which will allow more efficient shipment of weapons, ammunition and equipment to Ukraine.

The document, known as the 2022 Ukraine Democracy Lend-Lease Law, will expedite the transfer of critical military equipment and other critical supplies to Ukraine by cutting red tape.

It allows de facto donate equipment with the condition that the recipient countries pay their cost to the United States at a later date.

It is symbolic that Joe Biden signed the law on May 9, a special holiday for Russia.

“I am grateful to the President of the United States and the people of the United States for supporting Ukraine in the fight for our freedom and future. The signing of the lend-lease law today is a historic step. I am convinced that we will win together again. And we will defend democracy in Ukraine and Europe. Just like 77 years ago.”

“Today we have taken another step – very important and not just formal – on our way to the European Union. Ukraine has submitted the second part of the answers to a special questionnaire that every country aspiring to be part of the EU must complete. It usually takes months and months. But we did everything in a matter of weeks.

I talked with the President of the European Council Charles Michel, who visited Odessa. It is important to prevent a food crisis in the world caused by Russia’s aggressive actions. It is necessary to take immediate measures to unblock Ukrainian ports for the export of wheat. I appreciate the courageous position of the President of the European Council and his personal presence in Odessa. I am grateful for the continued support of our country by the EU in many areas.

The Council of Europe became the first organization to exclude Russia from its membership. We appreciate such steps in support of Ukraine and the condemnation of Russia’s aggressive war against our country. I am grateful to Secretary General Maria Pejčinović-Buric for the visit. It is important for us that you are personally convinced of the war crimes committed by the occupiers in the Kyiv region.”