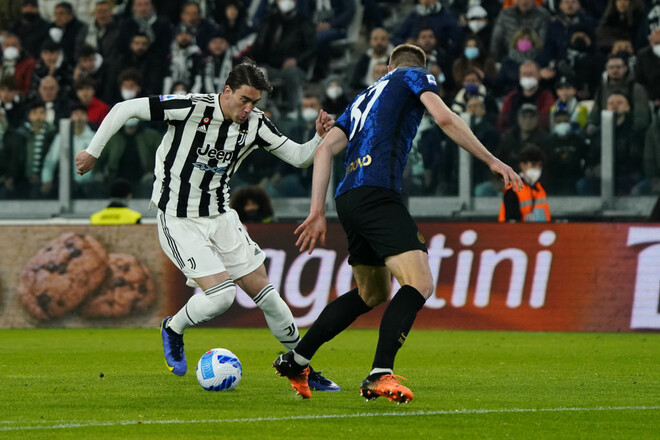 On Wednesday, May 11, in Rome at the Stadio Olimpico, the final of the Coppa Italia will take place, in which the current trophy holder, Juventus, and the national champion, Inter, will meet.

For Juventus, this final is the last chance to save a bad season and not end it empty-handed. The return to the coaching post of Massimiliano Allegri did not bring the expected results: in the Champions League, Turintsy were already eliminated in the 1/8 finals from Villarreal, and in Serie A, the terrible starting segment of the season was a heavy blow to the chances of the Old Lady, from which they no longer were able to leave.

After the New Year, Juventus still got a good move in Serie A, and it seemed that they would still be able to return to the race for the Scudetto. However, this Allegri team’s counterattack was interrupted by Inter, who on April 3 inflicted a minimal 1-0 defeat on Juventus in Turin. The defeat can be called not entirely fair and logical in terms of the content of the game, but, one way or another, after it, all the dreams of the Scudetto finally evaporated. Juventus are approaching the final of the Coppa Italia with a guaranteed place in the top 4 – there is no longer tournament motivation in Serie A.

The Coppa Italia will not be the first trophy to be played between Inter and Juventus this season. In January, the Milanese pulled out a 2-1 win in the last minute of injury time in the Super Cup duel thanks to a goal from Alexis Sanchez. In Turin, they are clearly aiming for revenge for the defeats in the last two head-to-head meetings.

While Juventus no longer have tournament motivation in Serie A, Inter continue their desperate pursuit of Milan in Serie A. Simone Inzaghi’s team is only 2 points behind, but at the same time inferior in personal meetings. Therefore, the Nerazzurri should hope that in the last two rounds, Milan will either suffer one defeat or draw twice.

The fate of the championship is not in the hands of Inter itself, and winning the Coppa Italia could be a consolation prize if the pursuit of Milan ends in failure. The path to the final of the Coppa Italia was much more difficult for Inter: in the 1/8 finals, Inzaghi Jr.’s team was on the verge of elimination in the match against Empoli, and then beat such formidable opponents as Roma and Milan.

The upcoming match will be the 34th in history between Juventus and Inter in the Coppa Italia. The advantage is on the side of Juventus: 16 wins against 10. Another 7 matches ended in a draw.

In the current realities, Inter is a more classy and well-coordinated team than Juventus, and is rightfully considered the bookmaker’s favorite for the final. It’s not certain that Simone Inzaghi’s team will win in regulation time, but betting that it is Inter who will lift the Coppa Italia over their heads (odds of 1.61) looks attractive.

Zelensky asks not to put pressure on the army: “No need to wait for daily victories”

Results of the 1st round of the Conference League. West Ham win in memory of the Queen

Overpaid. It became known how much Dynamo paid for Lonwijk