PETRAKOV: “To be honest, I have tears in my eyes and goosebumps” 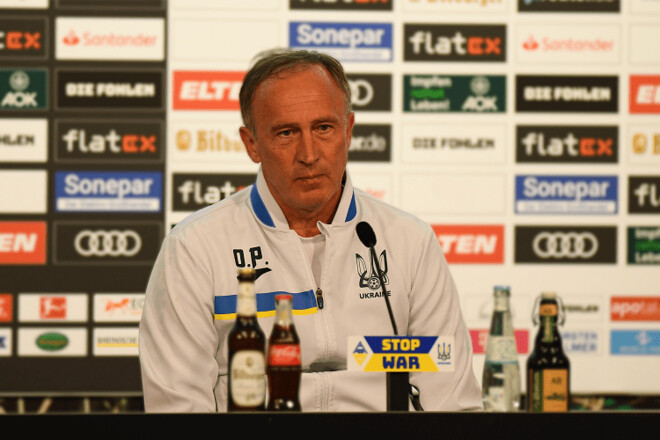 Head coach of the national team of Ukraine Alexander Petrakov commented on the result of the test match with Borussia M (2:1):

– The first match, the national team did not play for six months, I did not work for six months. I have no questions for the guys, at this stage they are great, they did everything well. There are a lot of mistakes, we will correct them.

– What emotions did you experience during the performance of the Anthem of Ukraine before the match? What is the atmosphere in the stadium like for you?

– Very good atmosphere. To be honest, I even had tears in my eyes, ants went over my skin. It’s great that our nation is united. Thanks to the Ukrainians for coming and supporting us, thanks to the Germans. The atmosphere was great.

– The national team is playing a match, scoring goals, and at this time there is a war in Ukraine and people are dying every day. What do you feel about this?

“I wish no one felt this. I have been in Kyiv since the first day when it all started. You sit in an apartment and do not know where the projectile will fly. I was not afraid to spend the night at home, and my wife went to spend the night in a bomb shelter, she could not stand it. It’s very frustrating and I don’t want anyone to experience this.

– Mudrik and Pikhalyonok started their careers in the national team in a masterpiece, they scored goals. What is the future of the guys in the team?

– Control game, no need to draw such hasty conclusions. You don’t have to praise guys. We have the main game ahead of us. I’m still thinking about who to put in stock. This is a test match, but the official ones will be different. The guys scored, I praised them, we move on.

– How would you comment on the game of Yefim Konoply, whose mistake led to a goal?

– I have no questions for my players. This is the internal kitchen. We will analyze the mistakes and move on.

– What is the state of Viktor Tsygankov now?

– Tsygankov stayed in Ljubljana, working with a rehabilitation specialist. I hope it will be up and running in 3-4 days. As for Artem Dovbik, with the help of Borussia Dortmund we did an MRI for him. He has a little damage, so today he was spared. Artem needs 5-6 days to recover.

– Have you formed a list of legionnaires who will be called up to the national team?

– We will sit down with the coaching staff and think. The list will be published tomorrow afternoon. Let me tell you right now that not everyone will be there. I will keep one name on the list of legionnaires.

– A lot of talk about the sparring of the Ukrainian team. How satisfied are you with the number of matches and the level of opponents?

– If we played official matches according to the initial schedule, then on the eve of the League of Nations, I would assemble the team at the end of May. I would give the guys a rest after the championship. And now it is almost impossible to find a sparring partner in Europe. People from the Ukrainian Football Association are doing their best to find rivals. We will play with Empoli and Rijeka, who responded. On May 19–20, I will give the guys two days off, and on May 21 at 17:00 we have training.

I want the players to see their families. As for the matches after that, I don’t know how it will turn out. There are options with African teams. It is impossible to play with club teams, because after the end of the championships, no one wants to wait to spar with us. People are working, UAF President Andrei Pavelko is dealing with the issue.

– With what emotions did you return to coaching after everything you experienced?

– I didn’t work for six months, the war began. When he entered the field, it was as if he was not at ease. But when the game started, he got involved. All is well, good result.

The return of Petrakov’s team. The national team of Ukraine beat Borussia M

Federer reveals how many Laver Cup matches he will play

Dawn announced the signing of another ex-player of Mariupol