On May 10, the Ukrainian national team held an open training session Monhengladbahu at the Borussia Park arena, before it began, meeting with children who were forced to leave Ukraine because of the war.

The flight from Ljubljana to Dusseldorf, which lasted as expected, 80 minutes, passed quickly. Another 40 minutes by bus – and the team was on the territory of the club stadium “Borussia” M, which impresses with ultra-modern architecture, club symbols and thoughtful infrastructure. Everything is close by and everything is comfortable here. The hotel where the hosts offered to accommodate their Ukrainian guests is a neighboring complex connected to the arena by a spacious glass corridor, where you can not help but feel proud of their favorite club. And here they are – the Silver Salad Cup, which Borussia Monchengladbach has won five times, and the UEFA Cup, which the club has won twice. And just above all this inscription – Willkomken im Park.

The Germans really received Ukrainians hospitably and warmly. More than half a million of our compatriots found refuge here during the war. Before the training, the coaches and players of the national team met on the field with children who came from the Nikopol orphanage, as well as with boys who studied in Ukraine before football in Dnipro, Kharkiv, Kyiv and whom Germany gave the opportunity to continue learning the basics of their favorite game. The meeting turned out to be very warm: a lot of photos, autographs on balls, T-shirts, and the opportunity to watch the pets throughout the evening.

Head coach Oleksandr Petrakov made the workout completely open. Borussia Park, as in the previous day in Brdo, trained 21 players of the national team. Viktor Tsygankov, who is continuing his rehabilitation course, and Oleksiy Hutsulyak, whose injury turned out to require two weeks of treatment, remained in Slovenia. This means that Alexei will not be able to help the team and therefore will soon leave the location of the blue and yellow.

After the warm-up, in which the coaches traditionally included elements of competition and speed of thinking, the team held several series of games to prepare for the match against Borussia M. According to the coach, everyone will have the opportunity to play tomorrow. The match will be the first for the Ukrainian national team after the start of the war, and although it has no official status, it is important both in preparation for the June matches and in terms of uniting Ukrainians and supporting the Ukrainian army and the Ukrainian nation defending Ukraine’s independence and freedom. About 20,000 tickets for the game have already been sold, but there are still at least 10,000 tickets on sale, which remain free for Ukrainians. So, we are waiting for the Ukrainian meeting at Borussia Park. 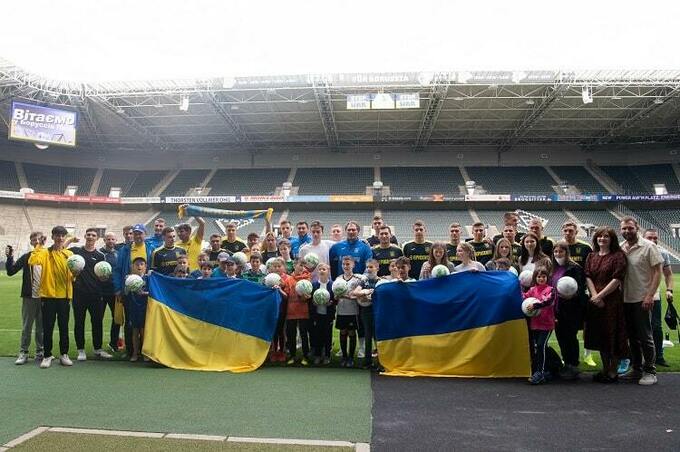 This inventor is broken. Elon Musk invited Ukraine to capitulate

Scored 16 goals. The national team of Ukraine held a bilateral