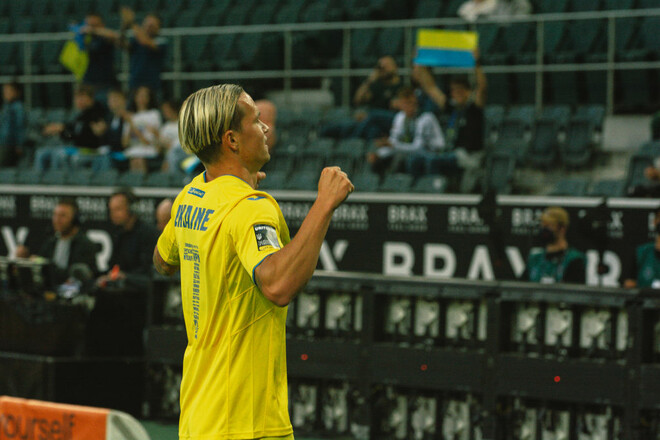 Commentator Oleksandr Mikhailyuk praised the game of the Ukrainian national team in the test match against Borussia M (2:1).

“The match itself was very atypical, if only because the national team and the club met. In fact, it was even an exhibition game. Although I don’t want to call the football match of the Ukrainian team in such a difficult time an exhibition one. In the stands, the overwhelming majority were our fans, and it was more of a support match. Support for our football team, support for our inflexible people, support for the struggle of the entire civilized world against barbarians from the east and north, support, finally, for the Armed Forces of Ukraine.

But we also do not forget that our team is preparing for butt, I hope, fights and I must admit honestly, I was looking forward to the match with Borussia, but at the same time I did not hope to see something unusual. Our legionnaires are still involved in their clubs, and Petrakov could only rely on players playing in Ukrainian teams. At the same time, we all hoped that the current collections are at about the same fairly high level in terms of physical fitness. In the end, these hopes were partially justified. Although it should be noted that Borussia Mönchengladbach, like our team, experimented and tested the nearest reserve during the meeting.

At the same time, we had many experiments both with personnel and with tactical schemes. We started with 2 central defenders, and in the second half we switched to a trio of centre-backs. What we liked was that our team felt quite comfortable in both models. We do not forget that Popov, Bondar, Bulets, Konoplya and others are well aware of Petrakov’s methods of work, so our “nearest reserve” did not “fall out” either. Regarding Yefim Konoply’s mistake, it was a purely technical mistake. The opponent simply “read” this pass and used it to the maximum. In general, the Ukrainian national team made a very decent impression both for the first match after a huge pause and for the duel where we did not have our main stars.

Although this evening a new star shone in the Ukrainian team.

Of course, one cannot ignore the game of Mikhail Mudrik, whom Alexander Petrakov did not take to the world championship that won for us. Throughout his stay on the pitch, Shakhtar’s winger, thanks to his technique and ease of handling the ball, terrorized opponents not only on the flank, but also in the center of the field and even in the position of the center forward. The amount of attacking work was done colossal. So this goal at the 9th minute was a reward for the young debutant for his diligence and the right motivation for the game. In the national team since Konoplyanka, we have not had such a bright, individually strong right-footed football player who would cover the left flank of the attack so well. I really want Mikhail to demonstrate the same level of play already in official matches. But in general, I really want our guys to add more and more with each sparring. Although, I repeat, as for starters, this is all very, very optimistic,” Mikhailyuk said.

Igor YOVICHEVICH: “I am proud that the players of Dnipro-1 have grown in value”