National national team of Ukraine On May 13, she held her first training session in Slovenia after returning from Germany. It was a sunny day in Brdo all Friday, giving tourists, whose number is growing noticeably in the national park by the end of the week, the maximum pleasure of staying in a picturesque area with unique landscapes.

Team of Ukraine in Slovenia – not for tourism purposes, training in blue and yellow is mainly evening. And such a climatic feature of this foothills that just at 17 o’clock it very often starts to rain here. The explanation is simple: it steams all day – it rains in the evening. This makes it easier to breathe and the players work more pleasantly than in stuffiness. Evening training began in anticipation of a heavy downpour: during the second half of the session, a black cloud hung menacingly over the mountains. However, despite the fact that it even smelled of rain, the cloud never reached the football field until even those players who like to stay and work individually have finished their work.

Before the arrival of foreign players, the list of which was announced by the head coach Alexander Petrakovthere are 22 players at the Slovenian training camp. Victor Tsygankov waited for the team to return to Brdo and joined the general group of players. Victor worked on an equal footing with everyone both during the game exercises and during the game series, scoring a spectacular goal from an acute angle after he circled the goalkeeper.

In the same time Artem Dovbik performed exercises separately from the rest, working under the supervision of the national team doctor Roman Zholobailyuk and physical training coach Ivan Bashtovoy. A few days of such work will help the forward remove the discomfort of the leg muscles. Meanwhile Alexey Gutsulyakwhose lateral knee ligament injury requires two weeks to recover, left the national team’s camp while the team was in Germany.

The coach of the blue-yellows called the training “football joy”, bearing in mind that all training sessions the guys will work out the technique, passing and control of the ball during the corresponding game exercises and series. Such activities are intended to cheer up the players after the control match with Borussia M, which took place on a moral upsurge and at a fairly high pace, taking a lot of physical and emotional strength.

Considering that the guys left the training somewhat exhausted, but in a good mood, the coaching staff achieved its goal. On May 14, the national team returns to the double training regime. 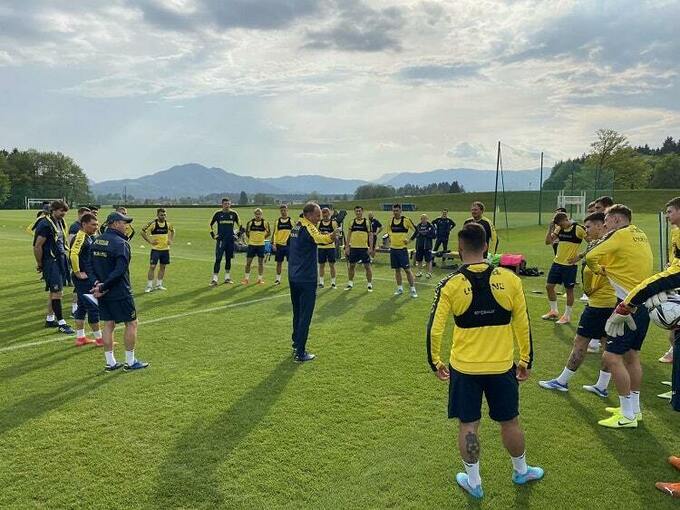 Marta FEDINA: “I can’t imagine what I would have done if I saw the Russians”