They are choked by a toad. Day 81. Orcs hit Ukraine with rockets after Eurovision

81st day of the war. May 15. President of the Russian Federation Vladimir Putin continues to wage a war of aggression in Ukraine. In connection with military aggression Sport.ua switched to a special mode of operation. The site covers all the events that take place in Ukraine.

Online broadcast of events, May 15

09:00. At night, Russian missiles hit a military facility in the Lviv region

Russian troops launched a missile attack on a military infrastructure facility in the Lviv region.

Head of the Lviv OVA Maxim Kozitsky: “On May 15, around 04:30, there was a missile attack on one of the military infrastructure facilities. As of now, there is no information about the dead and injured. The presence and nature of the damage is being specified.”

On the night of May 15, air alerts were announced for the first time since May 9 in western Ukraine. 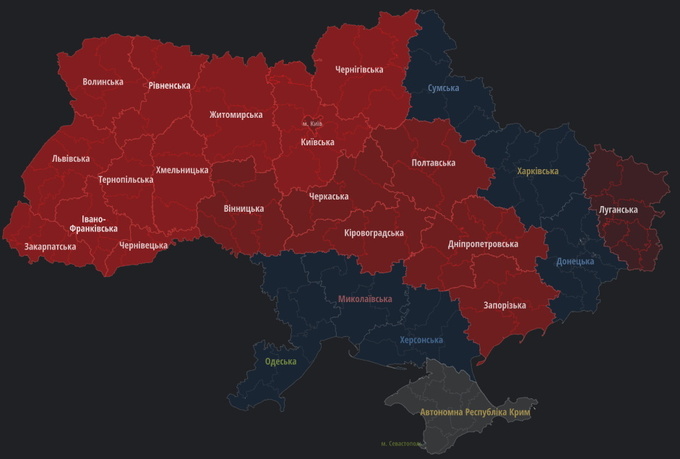 On the night of May 15, Russian troops fired at the Shirokovskaya community in the Krivoy Rog district of the Dnepropetrovsk region, from the Uragan MLRS.

Head of the Dnipropetrovsk OVA Valentin Reznichenko: “Night again with anxiety. At midnight, the enemy fired twice at the Shirokovskaya community in the Krivoy Rog region.

In the morning in the Dnepropetrovsk region, an air alert was again announced. At dawn on May 14, the Russian army also fired at the Shirokovskaya community from Hurricanes. People were not injured, windows were broken in several houses.

07:30. British intelligence: Russia will not be able to advance for 30 days, a third of the assembled army is lost

The Russian offensive in the Donbass has lost momentum and will not be able to recover for at least a month, and systemic problems continue to escalate, according to a public summary of the British military intelligence of May 15 (UP).

The British Ministry of Defense states that over the past month, despite insignificant initial achievements, Russia has not been able to capture a significant territory of Ukraine, and at the same time, the Russian army maintains a consistently high level of attrition.

“To date, Russia has probably lost a third of the ground combat forces it assembled in February (to attack Ukraine),” the British Ministry of Defense states. Such high estimates of Russian combat losses have not yet been heard. Also, the military department expects that delays will almost certainly increase due to the loss of bridge equipment and drones by the Russian army.

“Throughout the conflict, they lacked Russian bridge equipment, which slowed down and limited offensive maneuver. Russian UAVs, vital for tactical awareness and artillery control, have proven vulnerable to Ukrainian air defense,” the British state.

In addition, the actions of the Russian armed forces are increasingly limited by persistently low morale and declining combat capability of units that cannot be quickly replaced: “Under the current conditions, the Russian Federation is unlikely to be able to dramatically increase the pace of advances in Ukraine over the next 30 days,” military intelligence states. Britain.

06:45. Summary of the General Staff: the enemy is regrouping and is attacking in 4 directions

The invaders continue to conduct an offensive in the Limansky, Severodonetsky, Avdeevsky and Kurakhovsky directions, take measures to regroup their units.

General Staff of the Armed Forces of Ukraine: The enemy does not stop conducting offensive operations in the Eastern Operational Zone.

“From what we hear from sources in Russia and elsewhere, Putin is actually quite seriously ill.”

Christopher Steele, who headed Russia at MI6 in London from 2006 to 2009 and worked there in the 1990s, said Putin’s illness was part of what’s going on in Ukraine.

His comment comes after the head of Ukraine’s military intelligence, Kirill Budanov, also said that the Russian leader was seriously ill with cancer and that a coup was being prepared in Russia to eliminate him.

Talk about Putin’s health has been going on for several years and has intensified since he ordered the invasion of Ukraine.

President of Ukraine Vladimir Zelensky reacted to the victory of the Ukrainian group Kalush Orchestra in Eurovision 2022.

“Our courage strikes the world, our music conquers Europe! Next year Ukraine will host Eurovision for the third time in its history. And I believe it won’t be the last time.

We will do everything so that once the participants and guests of Eurovision will be hosted by Ukrainian Mariupol. Free, peaceful, rebuilt!

Thank you for the victory of the Kalush Orchestra and everyone who voted for us! I am sure that our victorious chord in the battle with the enemy is not far off.

The air defense of Ukraine eliminated the 201st aircraft of the Russian invaders and destroyed 7 more enemy air targets.

Representative of the Air Force Command of the Armed Forces of Ukraine Yuri Ignat: “On May 14, the anti-aircraft missile troops of the Air Force unpacked the third hundred downed aircraft of the Russian invaders. At about 18 pm, in the Kharkov region, in the depths of enemy territory, the 201st fighter of the invaders was shot down. The type is set.

Also, the air defense of the Ground Forces and the Air Force shot down 7 enemy unmanned aerial vehicles of the operational-tactical level.

Aviation of the Air Force continues to perform tasks in the airspace of Ukraine, inflicts rocket and bomb strikes on the positions of the occupying forces, in particular, a platoon stronghold, a KNP company, 10 armored vehicles and dozens of Rashists were destroyed.

02:40. Gaidai: Russians are preparing to cross the Seversky Donets again

Head of the Luhansk region Sergey Gaidai stated that, despite the mistakes and defeat from the Armed Forces of Ukraine, Russian troops are again preparing to cross the Seversky Donets:

“Rashists are preparing to cross the Seversky Donets River in Belogorovka again. Some idiots understood why they were sent there and the whole battalion refused to go on the attack, but soon a fresh one would be brought up. 2.5 thousand units of heavy equipment are already moving towards us from the previously occupied territories. We are waiting for the next underwater series in Belogorovka.

In the region, they are preparing for two major Russian offensives against Severodonetsk and a breakthrough on the Lisichansk-Bakhmut highway from Popasnaya and Belogorovka. Ukrainians are massively taken out of Popasna to the previously occupied territories in order to mobilize and force them to fight against Ukraine.”

The frontman of the Ukrainian group Kalush Orchestra Oleg Psyuk, after performing the composition in the final of the Eurovision Song Contest, called for the rescue of the defenders of Mariupol, who are at the Azovstal plant.

According to the rules, the next concert is hosted by the winning country of the previous one. If we win the war in a year, Eurovision 2023 will take place in Ukraine!

Zelensky: “The situation in Donbas remains very difficult. Russian troops are still trying to show at least some kind of victory. On the 80th day of a full-scale invasion, this looks especially crazy. But they do not stop all these attempts.

I thank everyone who holds the defense and brings it closer for the Donbass, the Sea of ​​\u200b\u200bAzov and Kherson. The same thing that is happening now in the Kharkiv region – step by step we are forcing the occupiers to leave our land. We will force you to leave the Ukrainian sea.”

Charlo became the first ever undisputed light middleweight champion of the world.

Holyfield’s son knocked out by journeyman

Holyfield's son knocked out by journeyman

VIDEO. How Zinchenko won the exercise at Arsenal training