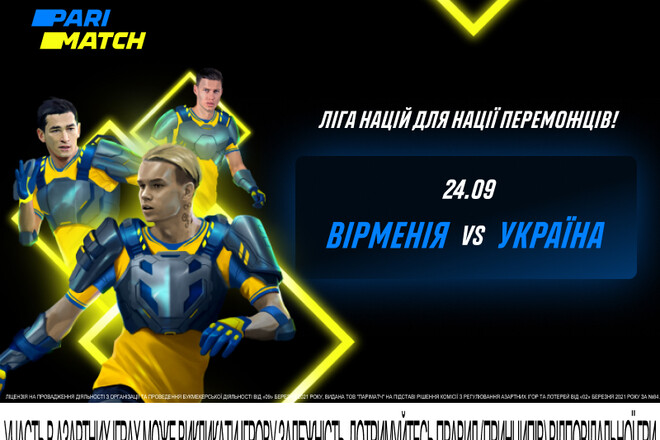 The Ukrainian national team significantly worsened its standings by losing to Scotland in Glasgow. So far, the team is in second position, 2 points behind the leaders of the Scots. Now, in order to still achieve the goal of moving up in the class to Division A, the national team needs to win both remaining matches in the Nations League group.

Immediately after the match at Gemden Park, Oleksandr Petrakov said that he looks to the future with optimism and has no doubt that the Ukrainians will achieve their goal. The first step is an away match against Armenia.

The first legal bookmaker Parimatch Ukraine has determined the favorites of the fight. According to experts, the Ukrainians should score three points in Yerevan without any problems. The odds for Petrakov’s team to win are 1.50, while the home team’s chances of success are 8.00 to 1. The odds for a draw are 4.50.

However, it is not worth considering the match against the Armenians ahead of schedule as victorious. At the moment, the Caparros team is in last place in our Nations League group, having a victory over the Republic of Ireland, which was won on the home arena. Statistically Ukrainians play well against Armenia. 6 wins in 9 matches and 3 draws. But at the same time, it was the draw in Yerevan in the qualification for Euro 2000 that became the key for the yellow-blues in the group. If not for the two lost points, the Ukrainians could have overtaken France in the standings, finishing in first place, but eventually went to the playoffs, where they sensationally lost to Slovenia.

Ukraine won the June match against Lodz with a score of 3:0, but the score does not mean at all that the game itself was easy for the team, in the end, the class and individual skills did their job. Now there are several significant changes that may affect the game of the Ukrainians. First, Petrakov still has a personnel shortage. In addition to Zinchenko, Bushchan, Shaparenko, the coach cannot count on Viktor Kovalenko, who has already left the national team due to injury. There is a possibility that Vitaliy Mikolenko, who trained separately for several days due to injury, will be ready to play. Dnepr-1 defender Eduard Sarapiy was also called to the team, but it is unlikely that the coach will immediately throw the debutant into battle. The question remains with position #1. Anatoly Trubin, who was taken from the youth team, entered the match against Scotland and conceded three times, so perhaps Petrakov will rotate in goal. The roster includes Lunin, Riznyk and Volynets. Another factor that can affect the state of the team is inconvenient logistics. After leaving for Scotland, the team will again have a grueling flight to Yerevan. While the Armenians are preparing at home, they are also purposefully preparing for the match with Ukraine.

Despite this, Ukraine remains the favorite, and any other result, except for a victory, is unacceptable for it. So, cheer for the “yellow-blue” and charge for the national team together with Parimatch Ukraine!

Myron Markevich: “Shevchenko had great assistants, so there was a result”

Myron Markevich: "Shevchenko had great assistants, so there was a result"

Move to Tottenham? Malinovsky’s wife subscribed to Conte on Instagram

Sergei NAGORNYAK: “We will win in Dublin”