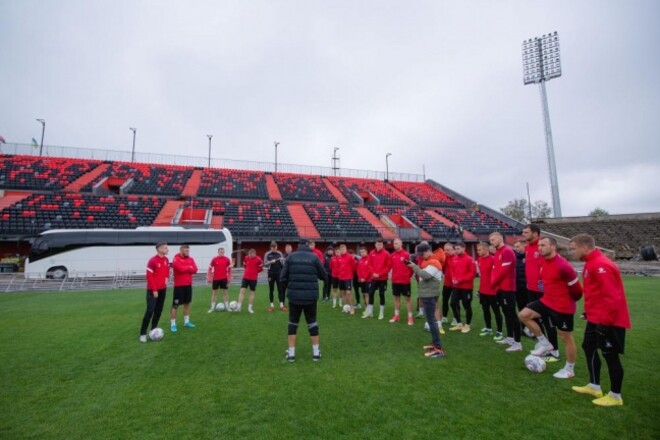 On Friday, September 30, after a break caused by the matches of the Ukrainian national team, in the first match of the 5th round of the UPL Veres in Rivne will host Rukh. After more than a five-year break, the red-blacks will return to the reconstructed Avangard stadium.

Rovenchany in four matches of the current championship won three victories and are at the top of the standings. It is no coincidence that according to the results of the voting organized by the UPL in the nomination “Best Player and Coach of August-September”, representatives of Veres won – midfielder Dmitry Klets and head coach Yuriy Virt. By the way, Klets, after completing his studies at the Lviv UFC, began his performances in the UPL in the Karpaty, and Wirth is a graduate of the Karpaty Sports School.

“Veres” played all four matches of the current championship on the fields of rivals. And the previous match of Rivne residents in the status of hosts took place in Lutsk in December last year and was with Rukh. One of the “highlights” of Veres’ application for the championship is the presence of three (!) pairs of twin brothers in the “red-black” team at once – Shestakovs, Pasichevs and Sharaevs. Veres defender Roman Gagun, who played for Rukh in the last championship, is preparing for the game with a special mood.

Rukhites had a bad start in the new championship, having suffered three defeats in a row. And in the last round, Rukh managed to open the scoring of victories, and even in the game against Zorya, which lost their first points in the championship in Lviv. Rukh approached the new confrontation with two club series. The passing series of the “yellow-blacks” lasts 5 games – 7 goals, and the drawless series – 4 games: a win and three losses. For Rukh head coach Leonid Kuchuk, this will be the 20th anniversary match in the UPL at the head of Rukh.

Here is the pre-match opinion of Rukh player Vitaliy Roman: “For Rovno residents, this will be the first official game at the new home stadium. Let’s hope we win. We have a young team, Veres has many experienced players. We must not be afraid and must act in unison. The opponent will be highly motivated. They return to their home stadium. After all, we are not whipping boys either. We will do everything to win.”

Previously, Veres has never defeated Rukh in two UPL matches – one draw and a defeat. The last time the Red-Blacks hosted the Rukhites was on December 11 last year, when they played a 1-1 draw in Lutsk. Both goals were scored in the second half. The home team scored first (after an accurate shot by Sergei Panasenko), and then Yuriy Klimchuk converted a penalty, saving the guests from defeat. By the way, in all personal meetings, both opponents do not leave the field without goals scored.

Oleksandr Solovyan (Kyiv), who played only 5 games in the UPL, was appointed referee of the match. Earlier, Veres played one game under Solovyan, beating Metalist 1925 at home last season. “Rukh” will hold the first meeting with this referee.

Both opponents will strive to celebrate the victory. Veres is looking forward to returning to the Avangard stadium. On the other hand, the Rukh players defeated one of the Zorya leaders in the last round and intend to beat another opponent. We predict a productive draw in a duel.

Preparing Ukraine for EuroBasket. Two World Cup qualifiers and a lot of sparring

Continental Cup. Kremenchuk started in the European Cup with a defeat